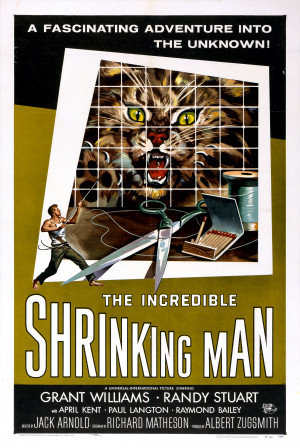 While on a boating trip, Scott Carey is exposed to a radioactive cloud. Nothing seems amiss at first, but several months later Scott realizes that he's shrunk in height by several inches. He sees a doctor, who admits that he's baffled. As Scott continues to shrink, decreasing to three feet tall, he becomes bitter, and lashes out at his wife, Louise. He begins to fear a cure will never be found -- since even as he becomes a national sensation, he's still shrinking.

In the 1950s, Robert Scott Carey, known as "Scott", is on vacation with his wife, Louise, when a strange mist covers him. Six months later, Scott notices his clothes are too large. Scott finds himself continuing to shrink, and seeks medical advice. At first dismissive, Scott's doctor confirms his shrinking with an X-ray. Scott is referred to a medical research institute, where it is determined Scott's exposure to the mist, combined with his later exposure to a pesticide, rearranged his molecular structure, causing him to shrink. Scott tells Louise in light of his predicament she is free to leave him. Louise promises to stay as Scott's wedding ring falls off his finger.

Scott's condition makes him a national curiosity. Media attention forces Scott into seclusion inside his home. Scott is advised to sell his story and he begins keeping a journal of his experiences. Scott feels humiliated and lashes out at Louise. An antidote is found to arrest Scott's shrinking, but doctors advise he will never return to his former size. Emotionally broken, Scott leaves home and meets a dwarf named Clarice, who is in town working in a carnival sideshow. Clarice encourages Scott and he is inspired to continue his journal. Later, Scott notices he has become shorter than Clarice, and runs home.

Scott shrinks small enough to live in a doll house and becomes more tyrannical. When Louise leaves home on an errand, Scott is forced to escape to his basement after Butch, the family cat, attacks him. Louise returns and assumes Butch ate Scott after she finds a bloody scrap of Scott's clothing. Louise prepares to move out and asks Scott's brother, Charlie, to help.

Scott encounters much hardship navigating his basement. The water heater bursts, but when Charlie and Louise come to investigate, Scott is too small for them to hear his screams for help. Scott next battles a large spider while finding food and shelter for himself. He ultimately kills the spider with a straight pin, and collapses in exhaustion. He awakens small enough to escape the basement through one of the squares of a window screen. Scott accepts his fate of shrinking to sub-atomic size. He is no longer afraid, concluding that no matter how small he becomes, he will still matter in the universe because God will know he exists.