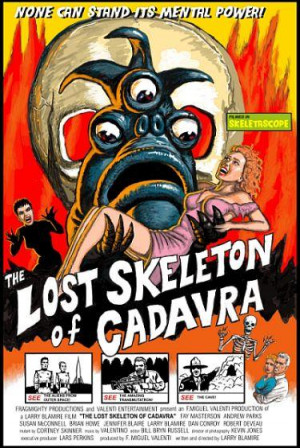 The Lost Skeleton of Cadavra

A dedicated scientist, aided by his clueless wife, rolls up his shirt sleeves and tries to save the world from a radioactive monster, curious space aliens, an evil scientist and a crabby skeleton in this send-up of the best of the B movies of the 1950's.

In 1961, scientist Dr. Paul Armstrong (Larry Blamire) and his wife Betty (Fay Masterson) drive into the mountains. Dr. Armstrong is searching for a meteorite that has fallen in the nearby woods, suspected to contain the rare element atmosphereum. Another scientist in the area, Dr. Roger Fleming (Brian Howe) questions Ranger Brad (Dan Conroy) about Cadavra Cave, a site rumored to contain a "Lost Skeleton".

That evening, both the Armstrongs and Dr. Fleming observe another falling meteor. A short time later a farmer (Robert Deveau), encountered by the Armstrongs on their way to the cabin, is mutilated by a mysterious beast. The second meteorite is actually a spaceship carrying two aliens. Kro-Bar (Andrew Parks) and Lattis (Susan McConnell) are from the planet Marva and are now stranded on Earth, in need of the element atmosphereum to repair their powerless ship. The ship's pet mutant (Darren Reed) escapes from its cage while they are distracted.

The next day, Dr. Roger Fleming finds Cadavra Cave and locates the Lost Skeleton. The Skeleton commands Fleming to bring atmosphereum to return him to life. Meanwhile, Dr. Armstrong and Betty venture into the woods, discovering the meteorite just outside Cadavra Cave. Dr. Fleming overhears them and plots to steal the meteorite from the pair. Kro-Bar and Lattis also journey into the woods, locating the cabin with the meteorite. Using a device called the "transmutatron," they disguise themselves as "Earth people" and clumsily manage to talk their way into the cabin, having been mistaken for the property owners. Not long after they arrive, Dr. Fleming discovers the aliens' transmutatron, left outside the cabin since it would ruin their disguise. He uses it to create an ally for himself, the alluring Animala (Jennifer Blaire), created from four different animals. After briefly teaching Animala the basics of human interaction, he leads her to the cabin and convinces the Armstrongs to invite him inside.

Soon it becomes clear to Lattis and Kro-Bar (calling themselves "Turgaso" and "Bammin" on Earth in an effort to pass as earth humans) that Fleming knows their secret. They soon cooperate in stealing the meteorite, after Betty is psychically attacked by the Skeleton and Dr. Armstrong is entranced by Animala's dancing. The evil scientist tricks the pair, however, and the Skeleton uses his mind powers to freeze the aliens in their tracks once Dr. Fleming has the meteorite. Dr. Fleming and Animala soon use the atmosphereum to resurrect the Skeleton. Meanwhile, Betty, waiting for Dr. Armstrong to come back, encounters the Mutant, who appears to fall in love with her, but she is terrified and faints.

While Fleming and Animala are resurrecting the skeleton, Armstrong arrives and encounters the unfrozen aliens. They also find Betty, who has realized that the mutant has some sort of feelings for her. After bonding over a meal, the four head off to try to obtain the meteorite before it can be used to resurrect the skeleton, but they are attacked by the Mutant. Dr. Armstrong is injured in the fight, but realizes that the monster does not want to harm Betty. Armstrong and his wife return to the cabin to recover, while the aliens try to stop Fleming on their own. However, they are captured by the skeleton's mind powers, and forced to dance by his psychic powers.

The Skeleton uses his mental powers to force Lattis into becoming his bride, much to Kro-Bar's chagrin. The Skeleton mocks everyone, including Fleming, but keeps them in line with his telepathy. When Armstrong sees what is going on, he comes up with a plan to get Betty to lure the Mutant to the wedding to disrupt it. After getting the Mutant to follow them, Armstrong and Betty attack Fleming and Animala. During the fight, the Skeleton kills Fleming after the latter is beaten by Armstrong. The Mutant then arrives at the wedding and attacks the Skeleton, whose powers do not affect beings with as simple minds as the Mutant. They instead fight until the Skeleton is thrown over a cliff, smashing apart on impact. The mutant then succumbs to its injuries and dies. Animala is turned back into the animals she originally was via the transmutatron. The alien and human couples spout traditional homilies about different species working together in harmony, then go to retrieve the atmosphereum.