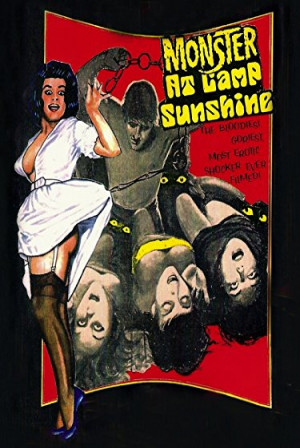 The Monster of Camp Sunshine

A scientist carelessly dumps some toxic waste into a river. The gardener at a nudist camp drinks the water, turns into a monster and attacks all the (female) nudists.

Monster at Camp Sunhine, The Monster of Camp Sunshine

Not your standard "Monster in the Nudist Camp" movie, as there's not really a monster, and it's not much of a nudist camp.

Martha and Claire are roommates -- Claire is a model, and Martha's a nurse at a research lab. One day, Martha accidentally knocks some chemicals into a rat cage, and the rats get loose and attack her. They are so vicious that they seem to almost be flung at her as if by someone off-camera. They even (kinda/sorta) knock her out of a window. This traumatizes Martha to point where Claire suggests that they both spend a relaxing weekend at Camp Sunshine, a nudist camp owned by a friend of theirs, Susan.

Meanwhile, Martha's boss (the scientist) decides to safely dispose of the strange chemical mixture while he whips up an antidote. So he throws it into the nearest large body of water. It is eventually fished out by a fisherman, and ends up spilled into the river that feeds the lake at Camp Sunshine. The gardener (Hugo, Susan's simple-minded brother) drinks the water, and goes crazy. His sister locks him up, and closes down the camp.

So when Claire and Martha (and Claire's fashion photographer and his girlfriend) show up at the camp to meet Susan, it's been shut down for a while. The timeline is fuzzier than a kiwi.

The Scoop:
This entry from the 1960s nudie cycle is somewhat of an oddity, featuring less nudity than expected, a semi-competent stab at a plot, a strange silent movie whimsy, and some fine black-and-white photography on location in New York City.

The story involves two young roommates trying to make their way in the big city — one is a fashion model trying to decide whether to model a topless bathing suit, and the other is a nurse at a hospital that inexplicibly has a lot of caged rats hanging around.

First the nurse introduces the model to the swinging life of Camp Sunshine, a nudist colony upstate, then accidentally spills chemicals on the rats, turning them into killers that chase her out a window. Her doctor boss, being the responsible sort he is, disposes of the dangerous chemicals by throwing them into the ocean. The plot just gets more ludicrous from there, culminating in the filmmakers trying to destroy the monster with parachuting scientists, a couple different armies and an entire stock footage library. One of the goofiest things you’ll ever see. 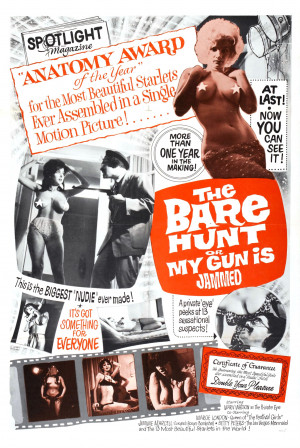