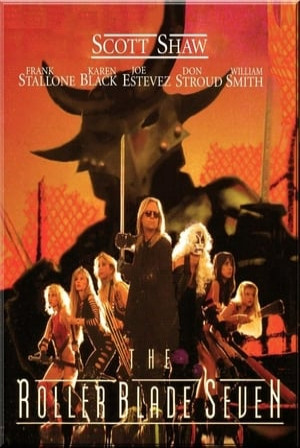 In a futuristic society, a sword-wielding roller skater fights evil ninjas, punk roller skaters and is sent on an important rescue mission.

The Roller Blade Seven unfolds in an abstract, dreamlike structure, utilizing minimal dialogue and repetition of footage in key scenes. Several sequences occur repeatedly, such as a scene in which the protagonist is seen to get on his motorcycle and ride out of a car-park eight times in a row, leaving from a different parking bay each time.

The film follows Hawk Goodman (Scott Shaw) who is sent on a mission by Father Donaldo (Donald G. Jackson) to rescue his sister, Sister Sparrow Goodman, from the clutches of the evil overlord Pharaoh (William Smith) in the apocalyptic world of the future. The film takes place in a region known as the Wheelzone whose populace travels solely by the means of roller skates or skateboards. Hawk, however, arrives riding a Harley Davidson motorcycle.

Sister Sparrow has been abducted from the Master of Light Institute by the evil Saint Offender (Joe Estevez). Before Hawk can complete his task, he must take psychedelic mushrooms with cult movie actress Karen Black and learn to rollerblade. Armed only with his samurai sword, Hawk does battle with the Black Knight (Frank Stallone), rollerblading ninjas and other gangs that inhabit the Wheelzone. Joining him on this mission are a Kabuki mime with a wiffle bat, a rollerblading banjo player entirely swathed in bandages and a pacifist named Stella Speed.

Pharoh's minions have been abducting women to make them his slaves. He explains that he uses a wheelchair due to an old skateboarding accident, and he longs for the days when he used to be able to ride a skateboard.