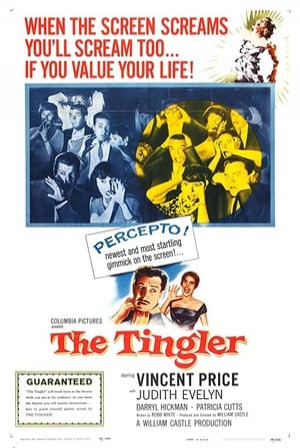 After much hard work, a pathologist discovers and captures a creature that lives in every vertebrate and grows when fear grips its host. "Scream for your lives!"

A pathologist, Dr. Warren Chapin (Price), discovers that the tingling of the spine in states of extreme fear is due to the growth of a creature that every human being seems to have, called a "tingler", a parasite attached to the human spine. It curls up, feeds and grows stronger when its host is afraid, effectively crushing the person's spine if curled up long enough. The host can weaken the creature and stop its curling by screaming.

Movie theater owner Oliver Higgins (Coolidge), who shows exclusively silent films, is an acquaintance of Dr. Chapin. Higgins's wife Martha (Evelyn), is deaf and mute, and therefore cannot scream. She dies of fright after weird, apparently supernatural events appear in her room. During her autopsy, Chapin removes a tingler from her spine.

After they contain the tingler and return to Higgins' house, it is revealed that Higgins is the murderer; he frightened his wife to death knowing that she could not scream because she was mute. The centipede-like creature eventually breaks free from the container that held it and is released into Higgins' theater. The tingler latches onto a woman's leg, and she screams until it releases its grip. Chapin controls the situation by shutting off the lights and telling everyone in the theater to scream. When the tingler has left the showing room, they resume the movie and go to the projection room, where they find the tingler and capture it.

Guessing that the only way to neutralize the tingler is to reinsert it inside Martha's body, Chapin does so. After he leaves, Higgins, who has admitted his guilt to Chapin, is alone in the room. As if by supernatural forces, the door slams shut and locks itself and the window closes, echoing what happened just before Martha was frightened to death. The tingler causes the body of Martha to rise from the bed, staring at her husband. Higgins is so terrified that he is unable to scream. The screen fades, and Dr. Chapin's voice says, "Ladies and gentlemen, just a word of warning. If any of you are not convinced that you have a tingler of your own, the next time you are frightened in the dark ... don't scream".

A team of parapsychologists try to figure out a strange phenomenon occurring in an apartment building.