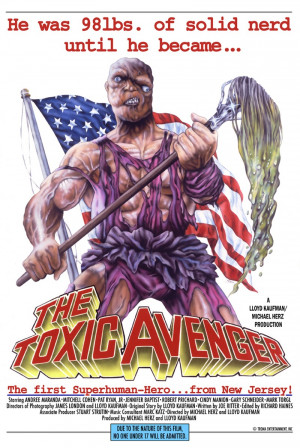 Tromaville has a monstrous new hero. The Toxic Avenger is born when meek mop boy Melvin falls into a vat of toxic waste. Now evildoers will have a lot to lose.

Melvin Ferd (Mark Torgl) is a 98-pound weakling who works as a janitor at a health club in the fictional town of Tromaville, New Jersey, where the customers—particularly Bozo (Gary Schneider), Slug (Robert Prichard), Wanda (Jennifer Babtist) and Julie (Cindy Manion)—harass him constantly. His tormentors become more violent, even deliberately killing a young boy on a bike with their car and taking photos of the carnage afterward. One day, they trick Melvin into wearing a pink tutu and kissing a sheep. He is chased around the health club and out a second story window. He lands in a drum of toxic waste, which sets him on fire. After running down the street in a ball of flames, Melvin douses the flames in his bathtub. The chemicals cause him to transform into a hideously deformed creature, but he is also gifted with superhuman size and strength.

A group of drug dealers, led by the criminal Cigar Face (Dan Snow), are harassing a police officer named O'Clancy (Dick Martinsen), trying to buy him off. When he refuses to accept the money, Cigar Face and his gang prepare to castrate him. Melvin appears out of nowhere and violently kills the criminals, then leaves a mop on their faces as a call sign. Cigar Face manages to escape, promising to return to take revenge. Melvin then tries to return home, but his mother is terrified of him and will not let him in the house; so Melvin, publicly dubbed "The Monster Hero" (also known as "The Toxic Avenger" or "Toxie") and hailed as a hero, builds a makeshift home in the junkyard.

Elsewhere in Tromaville, a gang of three men are holding up a Mexican restaurant and attack a blind woman named Sarah (Andree Maranda). They kill her guide dog and attempt to rape her, but are stopped by Melvin, who wreaks bloody vengeance on them. Toxie takes Sarah back to her home, where they begin to get to know one another and subsequently become romantically involved. Melvin continues to fight crime, including drug dealers and pimps for underage prostitutes, and also takes revenge on the four tormentors who caused his transformation. First, he attacks Wanda in the health club's sauna and burns her backside on the heater. He later returns to the club, pursues Julie into the basement, and cuts off her hair. He then confronts Bozo and Slug after they brutally stole a car, ending in Slug getting thrown out of the moving car and Bozo driving off the side of a cliff, killing him.

As Melvin gives aid to the people in the city, Mayor Belgoody (Pat Ryan Jr.), the leader of Tromaville's extensive crime ring, is horrified of what is happening to his goons. He is worried that it will lead back to him and wants Melvin to be taken care of. A group of men, led by Cigar Face, surround Melvin with guns. Just before they fire on him, he leaps up to a fire escape, so that they end up shooting each other.

When Melvin kills a seemingly innocent old woman in a dry cleaning store (she is in fact a leader of an underground human trafficking ring), Belgoody uses this opportunity to call in the United States National Guard. Back in his junkyard home, Melvin is terrified of what he has become, and he and Sarah decide to move away from the city and take a tent into nearby woods. They are eventually discovered, and the Mayor and the National Guard come to kill him, but the people of Tromaville will have none of it. The Mayor's evil ways are revealed, and Melvin proceeds to rip out Belgoody's organs to see if he has "any guts". The movie ends with a reassurance that the Toxic Avenger will continue to combat crime in Tromaville.