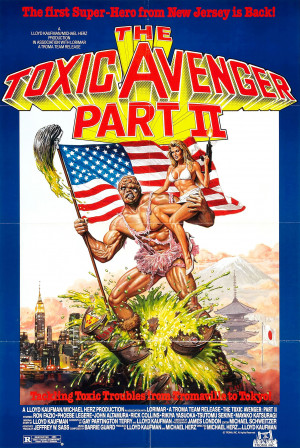 The Toxic Avenger is tricked into traveling to Tokyo to search for his estranged father, leaving Tromaville open to complete domination by an evil corporation.

Melvin Junko (originally Ferd) has been transformed into the superhero known as the Toxic Avenger. He has made Tromaville a safe place again. However, with no more evil to destroy, Melvin has suffered depression until his blind girlfriend Claire (originally Sara) has gotten him a job at the Tromaville Center for the Blind. When the lunch bell rings, all of the residents enter the building when a mysterious limo pulls up. Inside the limo are the Chairman of Apocalypse Inc. and his number one, Malfaire. Apocalypse Inc. is a New York-based chemical company that finds Tromaville to be the perfect home for its new takeover site. However, they know all about The Toxic Avenger. The Chairman hires a member of his team disguised as a PUS deliveryman to deliver a bomb into the center. Claire escapes in time upon learning of the bomb, but everyone else is killed. However, when the deliveryman and an Apocalypse construction worker arrive to begin their takeover, the Toxic Avenger emerges from the rubble and kills the duo. This leads to an all-out assault by various members of Apocalypse Inc. with the Chairman and Malfaire watching. Toxie easily defeats the group of thugs, either killing them or in the case of one, making him run away. The only survivors of the explosion are Toxie, Claire, and a blind mom and her infant daughter.

Apocalypse Inc., reeling from their defeat at the hands of Toxie, hatch a plan to lure him out of Tromaville. They discover Toxie's father had left him and his mother when he was just a baby. Using one of their "bad girls" as Toxie's psychologist, the plan will involve sending Toxie to Japan to look for his father. The psychiatrist, using her Freudian psychology, convinces him to go to Japan, even though he has reservations about leaving Claire. Claire tells Toxie to go find his father and that she loves him. The next day, Toxie leaves for Japan but since he cannot exactly go on a plane, he heads to Japan using a windsurfboard and a paper asking for his father from the worker at a local Japanese restaurant. However, forgetting his passport, he enters Tokyo Godzilla-style, shocking a group of beachgoers. His appearance shocks everyone he comes across, including a news reporter who occasionally shows up throughout the film.

While on his quest, he runs into Masami, who is at first shocked, but smiles at him. As Toxie tries the Japanese snack taiyaki, a local gang begin to assault Masami, causing Toxie's "Tromatons" to go berserk. He goes after the gang and uses the taiyaki fish-shaper to meld one thug's nose into the shape of a fish. He goes after the ring leader of the group and follows him to a public bath house, where he uses his hot breath power to make the water hot for the gang leader while putting in vegetables and noodles. Finally, he goes after the female member of the trio and follows her inside a local radio station where he ties her up and turns her into a "human transmitter". Thanking him for saving her, Masami befriends Melvin and offers to help him find his father.

Meanwhile, as Melvin is in Japan, Apocalypse Inc. takes full advantage and begin a hostile takeover of Tromaville. This causes people who stand up against them to get beaten up, or in the case of a couple of protestors, get run down and killed. Back in Tokyo, Masami and Melvin finally find Big Mac Junko, a Japanese man decked out in a suit. Melvin is elated and run towards his father until his Tromatons go berserk again. Masami sees a shipment of fish dropped on the floor and discovers cocaine in the fish. Big Mac is a Yakuza leader who delves in drug dealing and when Melvin is forced to confront his father, he goes through a series of battles against Yakuza enforcers, a sickle-chain wielding female member, and Kabuki warriors. Using the environment to his advantage, Melvin is able to defeat the entire gang, only leaving him and his father, who becomes a sumo wrestler. Big Mac reveals to Melvin a bottle of "anti-Tromatons", the one weakness that can kill Melvin. However, Melvin is able to kick the bottle out of his father's hand and push him to a fish butcher, who, excited by the action, kills Melvin's dad by chopping him up. The bottle breaks and Melvin begins to weaken. However, Masami takes Melvin to a sumo gym, where he is healed and begins training in the art of sumo before saying goodbye to Masami and head back to Tromaville.

Upon his return to Tromaville, he learns that Malfaire and the "bad girls", including his now former psychiatrist, are assaulting Claire. He takes on the bad girls while Claire finally gets the upper hand on Malfaire, incapacitating her. With Melvin back, the people of Tromaville are safe again. That is, until the Chairman hires the Dark Rider to destroy Tromaville. A motorcycle rider with nitroglycerin strapped to his back, the plan is for the Dark Rider to burst into City Hall. Melvin hijacks a taxi with a bickering elderly couple celebrating their anniversary and after a series of turns and misses, ends up crashing the taxi, forcing everyone to get out after an explosion. Then, Melvin hijacks a hovercraft and drives it after the Dark Rider, finally forcing him to bust into a home, causing the Dark Rider's demise. Once again safe from the hands of Apocalypse Inc., the people of Tromaville are elated. A man arrives in Tromaville and is revealed to be Melvin's real father. Melvin learns the Yakuza leader he defeated in Japan was "Bic Mac Bunko", who is glad to be reunited with both Melvin and his mom and is happy that Bunko, who had used identity theft against him, is no more. Meanwhile, the Chairman and Malfaire attempt to hitch a ride back to New York and fail at doing that.