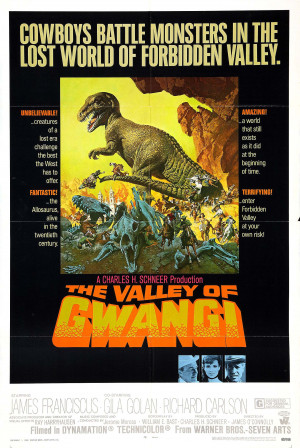 The Valley of Gwangi

A turn of the century wild west show struggling to make a living in Mexico comes into the possession of a tiny prehistoric horse. This leads to an expedition to the Forbidden Valley where they discover living dinosaurs. They capture one and take it back to be put on display, leading to inevitable mayhem.

In Mexico at the turn of the 20th century, a cowgirl named T.J. Breckenridge hosts a struggling rodeo. Her former lover, Tuck Kirby, a heroic former stuntman working for Buffalo Bill's Wild West Show, wants to buy her out. Along the way, he is followed by a Mexican boy named Lope, who intends to join the rodeo on a quest for fame and fortune. T.J. is not interested in Tuck because of this, but Tuck is still attracted to T.J., especially when T.J. jumps off a diving board on her horse. T.J. finally accepts Tuck when he saves Lope from a bull and the two kiss.

T.J. has an ace she hopes will boost attendance at her show - a tiny horse called El Diablo. Tuck meets a British paleontologist named Horace Bromley, who is working in a nearby Mexican desert. Bromley shows Tuck fossilized horse tracks, and Tuck notes their similarity to El Diablo's feet. Tuck sneaks Bromley into the circus for a look at El Diablo, and Bromley declares the horse to be a prehistoric Eohippus.

The tiny horse came from a place known as the Forbidden Valley. A gypsy known as Tia Zorina claims that the horse is cursed, and demands that it be immediately returned. Later, she and the other gypsies collaborate with Bromley to steal El Diablo and release it back in the valley. Bromley hopes to follow the horse to its home in search of other prehistoric specimens. Carlos, an ex-member of the Gypsy tribe now working for T.J.'s circus, walks in on the theft and tries to stop it, but is knocked out.

Tuck arrives just as the Gypsy posse leaves. Carlos sees him as he is regaining consciousness. Tuck notices that the horse is missing, and sets off after Bromley. When T.J. and her crew discover Carlos, Carlos claims that Tuck has stolen El Diablo for himself. Carlos, T.J., and the others decide to follow Tuck and Bromley into the valley.

Making their way into the Forbidden Valley, Tuck, T.J., and the rest of the group meet up and soon discover why the valley is said to be cursed when a Pteranodon swoops down and snatches Lope but due to the weight it falls back to the ground. After Carlos kills the Pteranodon by twisting its neck, they spot an Ornithomimus, which they chase after in the hopes of capturing it. Just as it is about to escape, it is killed by Gwangi, a vicious Allosaurus which chases Bromley and the rest of the group. However, a Styracosaurus appears and drives Gwangi away. As Gwangi leaves, he takes the dead Pteranodon with him.

Later, Gwangi pursues the group to their base camp and they try to rope him down, but he breaks free when the Styracosaurus reappears. Gwangi battles and kills the Styracosaurus and later manages to catch and kill Carlos, but is knocked out by a rockslide while trying to exit the valley in pursuit of the rest of the group.

Securing the creature with ropes, Tuck and the other men in the group take Gwangi back to town to be put on display in T.J.'s show. On the opening day of the show, the dwarfed Gypsy sneaks in and begins to unlock Gwangi's cage in an effort to free him, only to be killed when Gwangi breaks free. The crowd begins to flee as Gwangi attacks, and Tia Zorina is trampled to death in the chaos. Bromley is crushed by a broken piece of the cage, and Gwangi attacks and kills a circus elephant before rampaging through the town. Tuck, accompanied by T.J. and Lope, tries to hide the crowd in a cathedral, but Gwangi finds them and breaks in. Tuck urges the crowd out through a back exit, leaving Tuck inside with Gwangi, T.J. and Lope.

Though Gwangi tries to eat them, he is distracted when the cathedral's organ is accidentally sounded off as Tuck falls backwards into the keyboard. Tuck then manages to wound the dinosaur with a flag and throws a torch onto the floor near Gwangi, setting the building on fire. Tuck and the others manage to escape, leaving Gwangi trapped in the burning, collapsing building. Shrieking in agony, Gwangi is finally crushed to death by the falling debris, as Tuck, T.J., Lope (with tears in his eyes), and the townspeople look on.