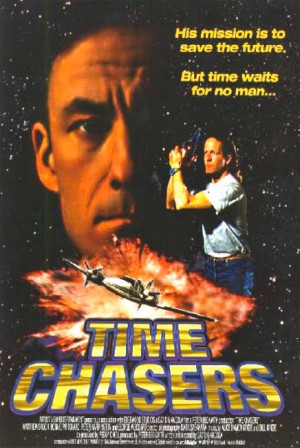 Saving the future before time runs out… Inventor Nick Miller dreams of traveling through time, of stopping war and curing humanity's problems. He invents the Transport, a time machine, to better the world.

Physics teacher and amateur pilot Nick Miller (Matthew Bruch) has finally completed his quest of enabling time travel, via a Commodore 64 and his small airplane. After being inspired by a television commercial for GenCorp, he uses a ruse to bring out both a GenCorp executive and a reporter from a local paper. To Nick's surprise, the reporter is Lisa Hansen (Bonnie Pritchard), an old high school flame. One trip to 2041 later and Gencorp's executive, Matthew Paul (Peter Harrington), quickly arranges Nick a meeting with CEO J.K. Robertson (George Woodard). Impressed by the potential of time travel, Robertson offers Nick a licensing agreement on the technology.

The following week, Nick and Lisa meet at the supermarket and go on a date to the 1950s. However, another trip to 2041 reveals that GenCorp abused Nick's time travel technology, creating a dystopian future. In an attempt to tell J.K. about how GenCorp inadvertently ruined the future. J.K. dismisses the eventuality, and states that there's enough time to worry about how to fix it before it happens. J.K. sees Nick as a threat to GenCorp, and due to the association with the U.S. Government, considers Nick's actions as treason. Nick and Lisa escape GenCorp and spend the remainder of the film trying to reverse the damage to the future. When J.K. finds out about this, he and Matt try to shoot down Nick's plane, killing Lisa in the process while Nick jumps out before the plane crashes.

This ultimately culminates in a fight in 1777 during the American Revolution, the deaths of the present Nick and Robertson, and the destruction of the time machine before the original demo, thus ensuring that the majority of the film's events never happen in the first place. The film ends with the now current Nick (now aware of the danger of his time machine) sabotaging his demonstration, and doing a pitch of how an elderly skydiver would be a better ad campaign for J.K.'s company. Furious about being misled, J.K. fires Matt. Nick deletes the eight 5¼" floppy disks that make time travel possible. At the end of the film, Nick talks to Lisa in the supermarket as he did in the previous timeline.