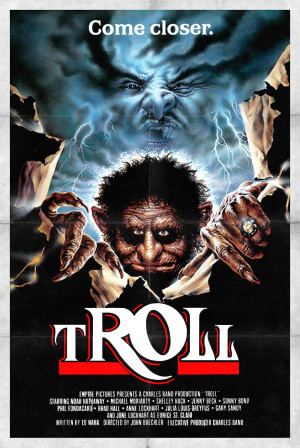 When a family moves into a San Francisco apartment, an opportunistic troll decides to make his move and take possession of little Wendy (Jenny Beck), thereby paving the way for new troll recruits, the first in his army that will take eventual control of the planet. We soon discover Torok is the ex-husband of Eunice St. Clair, a resident in the building who was married to Torok.

The Potter family – Harry Sr. and Anne with teenage son Harry Jr. and young daughter Wendy – move into a new apartment complex in San Francisco. While unpacking, Wendy is attacked by a grotesque little creature wielding a magic ring. The troll captures Wendy and takes on her appearance. After meeting the other eccentric tenants, the family notices Wendy's unusual and aggressive behavior, but they attribute her behavior to the stress of the move. The troll goes from apartment to apartment transforming the tenants into fairy tale creatures (such as goblins, nymphs and elves) and their apartments into lush forests. Concerned by his sister's behavior, Harry Jr. seeks solace in the company of a mysterious old woman named Eunice St. Clair, who reveals herself to be a witch. Long ago, she and a powerful wizard named Torok were in love. At that time, the world was divided between fairies and humans. The realms were equal and independent of each other; however, Torok and some of the fairies challenged this balance, resulting in a great war in which the humans prevailed. Torok was mutated into a troll as punishment.

Torok seeks to regain his power, destroy humanity and recreate the fairy tale world he had once lived in. As Torok requires a princess, he is keeping Wendy alive. Eunice and Harry Jr. discover that all the apartments have been transformed into a part of the magical world. Eunice gives Harry Jr. a magic spear capable of killing the largest and most vicious creature in this world. Eunice is attacked by Torok and mutated into a tree stump, and Harry finds his sister trapped in a coffin of glass. Harry Jr. saves Wendy, but loses the magic spear when Torok's great batlike monster attacks.

Before the monster can kill Harry Jr. and Wendy, Torok kills it himself to spare Wendy, destroying his carefully constructed fairy realm. As the magic world collapses around them, Harry Jr. and his family are given a chance to escape, leaving just as the police arrive. Eunice is restored to normal as well as she bids Harry farewell and departs. As the police investigate the house, one of them is drawn into a remaining fragment of the alternate fairy world. Torok's arm rises into view, preparing to use his ring on the cop.

An evil yet adorable Gingerbread man comes to life with the soul of a convicted killer, and this real life cookie monster wreaks havoc on the girl who sent the killer to the electric chair.

Post-apocalyptic surrealist black comedy about the landlord of an apartment building who occasionally prepares a delicacy for his odd tenants.

When she takes up her new post at an eerie convalescent home deep in the French countryside, nurse Martine soon discovers that seve...More

Some rich gangster creep rapes a gal. He's imbued with black magic powers by some other guy. Stuff happens leading up to the greatest endgame of all time.

Three stories. A solitary sailor falls from his boat and washes ashore on a tropical island. While seeking rescue, he's found ...More

A young photographer and his girlfriend discover mysterious shadows in their photographs after a tragic accident. They soon learn that you can not escape your past.