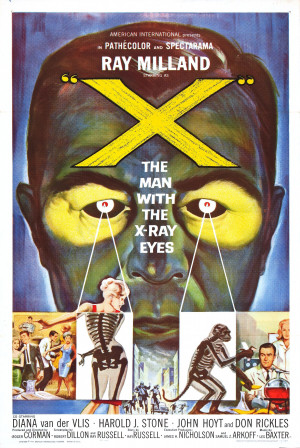 X: The Man with the X-Ray Eyes

Dr. James Xavier is a world renowned scientist experimenting with human eyesight. He devises a drug, that when applied to the eyes, enables the user to see beyond the normal realm of our sight (ultraviolet rays etc.) it also gives the user the power to see through objects. Xavier tests this drug on himself, when his funding is cut off. As he continues to test the drug on himself, Xavier begins to see, not only through walls and clothes, but through the very fabric of reality!

A doctor uses special eye drops to give himself x-ray vision, but the new power has disastrous consequences.

Dr. Xavier develops eye drops intended to increase the range of human vision, allowing one to see beyond the "visible" spectrum into the ultraviolet and x-ray wavelengths and beyond. Believing that testing on animals and volunteers will produce uselessly subjective data, he tests the drops on himself.

Initially, Xavier discovers that he can see through people's clothing, and he uses his vision to save a young girl whose medical problem was misdiagnosed. Over time and with continued use of the drops, Xavier's visual capacity increases but his ability to control it decreases. Eventually, he can see the world only in forms of light and texture that his brain is unable to fully comprehend. Even closing his eyes brings no relief from the darkness in his increasingly frightening world, as he can see through his closed eyelids.

After accidentally killing a friend, Xavier goes on the run, using his x-ray vision first to work in a carnival, and then to win at gambling in a Las Vegas casino. His eyes are altered along with his vision; first they become black and gold and later entirely black. To hide his startling appearance, he wears dark wraparound sunglasses at all times.

Leaving Las Vegas, Xavier drives out to the desert and finds a religious tent revival. He tells the evangelist that he is beginning to see things at the edges of the universe, including an "eye that sees us all" in the center of the universe. The pastor replies that what he sees is "sin and the devil" and quotes the Biblical verse, "If thine eye offends thee... pluck it out!" Xavier chooses to blind himself rather than continuing to see anything more.