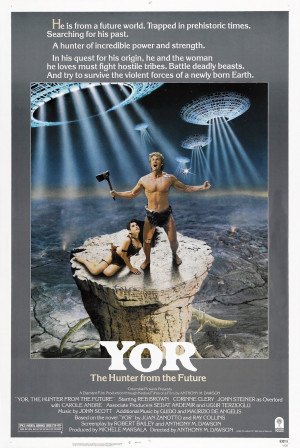 Yor, the Hunter from the Future

In prehistoric times, the muscular Yor saves his cave-babe from a dinosaur just before they get zapped into the future to battle bad guys in the familiar desolate wasteland.

Yor, a roving hunter and barbarian, jogs through a seemingly prehistoric desert landscape, past the stone towers of Cappadocia, Turkey. In a nearby village, Kala, a seemingly primitive cavewoman, and her mentor and protector Pag are hunting. They were hunting a small pig-like Polacanthus. Suddenly, they are attacked by a "stegoceratops", (a cross-breed of a Stegosaurus and a Triceratops). Yor appears and kills the dinosaur with his axe, drinking some of its blood immediately afterwards. Yor is befriended by the village, and together, the villagers cut the choice meats to be feasted upon in celebration.

While Yor rests, a band of cavemen with bluish skin attack the village. Only Yor and Pag escape. Yor immediately swears to get Kala back. Yor and Pag track the blue cavemen to their lair, where Yor shoots a giant bat with his bow and arrow. He uses the dead bat like a hang glider to storm the lair and starts flooding sections of the cave, the diversion helping his escape out the back with Kala. The flood kills everyone inside the cave, including the other kidnapped villagers (who had been locked in cages) as well as the blue cavemen.

Kala and Pag decide to follow Yor in his adventure to find his origins. Along the way, they find a mysterious society of sand mummies led by a blonde woman named Roah with an amulet similar to Yor's own. Yor proceeds to kill everyone except Roah, deciding that she will be important for their journey. Kala tries to kill Roah at one point, but they are both suddenly attacked by more blue cavemen. Yor and Pag come to the rescue, but a caveman strikes Roah down from behind and she dies in Yor's arms.

Yor, Pag, and Kala make friends with another tribe after saving some children from a dimetrodon, but this tribe is killed by (unseen) flying saucers shooting lasers. Yor and company use a boat to make their way to an island surrounded by storms. There Yor discovers, to his initial disbelief, that his parents were from a small band of nuclear holocaust survivors, thereby revealing the "twist" that Yor's world is actually post-apocalyptic Earth after a nuclear holocaust. A ruthless tyrant called the Overlord has taken control of the remaining nuclear technology with his android army.

Yor finds allies in a group of rebels led by the scientist, Ena and the mysterious blind Elder, who have been plotting to overthrow the Overlord for years. Yor and the rebels join forces and attack the Overlord and his androids. Ena leads them to the fortress's atomic stockpile, where they plant explosives powerful enough to destroy it and the fortress. The Elder remains behind and slowly deactivates the android army, buying time for the others to escape. The Overlord pursues them in an attempt to stop the stockpile's destruction and briefly engages Yor in combat, overwhelming him temporarily. As the Overlord enters a nearby elevator, Yor grabs a nearby pole and hurls it through the window, impaling the villain. Mortally wounded, the Overlord struggles onward toward the stockpile as Yor and Ena continue to lead the others to safety. Pag orders them to keep going while he fends off the androids, but he loses his weapon and ends up getting cornered by them. Ena and the rebels quickly rush to his aid, but just as the androids are about to kill Pag, the Elder deactivates them as well. The group quickly boards one of the Overlord's ships just as the Overlord himself reaches the stockpile control room. But before he can stop the bomb, it explodes and he succumbs to his injuries and slowly dies. At the same moment, the Overlord's spacecraft, carrying Yor, Kala, Pag and the rebels flies out of the hangar to safety, while the Overlord's facility explodes behind them. As the movie ends and the ship flies off into the distance, the narrator intones: "...Yor returns to the primitive tribes on the mainland. He is determined to use his superior knowledge to prevent them making the same mistakes as their forefathers. Will he succeed?"

An evil yet adorable Gingerbread man comes to life with the soul of a convicted killer, and this real life cookie monster wreaks havoc on the girl who sent the killer to the electric chair.

Post-apocalyptic surrealist black comedy about the landlord of an apartment building who occasionally prepares a delicacy for his odd tenants.

When she takes up her new post at an eerie convalescent home deep in the French countryside, nurse Martine soon discovers that seve...More

Some rich gangster creep rapes a gal. He's imbued with black magic powers by some other guy. Stuff happens leading up to the greatest endgame of all time.

Three stories. A solitary sailor falls from his boat and washes ashore on a tropical island. While seeking rescue, he's found ...More

A young photographer and his girlfriend discover mysterious shadows in their photographs after a tragic accident. They soon learn that you can not escape your past.