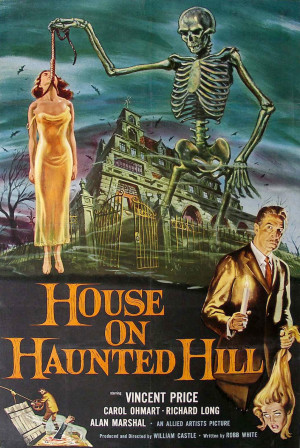 Frederick Loren has invited five strangers to a party of a lifetime. He is offering each of them $10,000 if they can stay the night in a house. But the house is no ordinary house. This house has a reputation for murder. Frederick offers them each a gun for protection. They all arrived in a hearse and will either leave in it $10,000 richer or leave in it dead!

Frederick Loren (Vincent Price), an eccentric millionaire, invites five people to a party he is throwing for his fourth wife Annabelle (Carol Ohmart) in an allegedly haunted house he has rented, promising to give each $10,000 with the stipulation that they stay the entire night in the house after the doors are locked at midnight. The guests are test pilot Lance Schroeder (Richard Long), newspaper columnist Ruth Bridges (Julie Mitchum), psychiatrist Dr. David Trent (Alan Marshal) who specializes in hysteria, Nora Manning (Carolyn Craig) who works for one of Loren's companies, and the house's owner Watson Pritchard (Elisha Cook). All are strangers to both the Lorens and each other, with their only commonality a desperate need for money.

The Lorens have a tense relationship since Frederick is convinced Annabelle tried to poison him in order to acquire his wealth, which Annabelle firmly denies, attributing his suspicions to paranoia and jealousy. Watson believes the house is genuinely haunted by the ghosts of those murdered there, including his own brother. He gives a tour of the house, including a vat of acid in the basement which was used by a previous resident to kill his wife. When Lance and Nora remain behind to further explore the basement, Lance is locked in an empty room and struck on the head, while Nora is confronted by a menacing ghost.

Annabelle privately warns Lance that her husband is scheming something, and that she suspects him of murdering his second and third wives after his first wife disappeared. Gathering downstairs, the guests are told the rules of the party, and each is given a .45 ACP caliber pistol for protection. Having encountered further apparitions, Nora decides against staying the night but the caretakers lock the doors five minutes early, taking that option out of the guests' hands.

Hearing a scream, Lance and David find Annabelle's corpse, suspended to suggest she hanged herself but the absence of a perch immediately arouses suspicions of murder. Lance is confronted by Nora, who tells him an unseen assailant strangled her and left her for dead. In light of Annabelle's warnings, they both suspect Frederick. He tells her to remain out of sight so that her attacker will still think her dead. To survive the night, Lance and David propose that everyone stay in their rooms and shoot anyone who enters, thus the innocents will have no reason to leave their rooms and the killer must stay put or admit his guilt.

Nora is chased from her room into the basement by Annabelle's ghost. Aroused by the ghostly sounds, David concludes that the killer is about and proposes he and Frederick split up to search the house. Lance uncovers a secret room at the end of the second-floor hall, but once he enters the door shuts behind him, trapping him. David instead meets with Annabelle, who had faked her death using a hanging harness and sedatives. Secretly lovers, the two of them have orchestrated the various mishaps in order to manipulate Nora into killing Frederick. Nora, seeing Frederick enter the basement with a gun in his hand, does indeed shoot him. After she flees, David slips in to dispose of Frederick's body in the vat of acid.

Annabelle walks to the basement to confirm her husband is dead. A skeleton rises from the acid, accuses her in Frederick's voice, and shoves her into the vat. Frederick emerges from the shadows, holding the puppeteer control unit that he used to manipulate the skeleton and revealing he had known their plot all along.

After Nora, Watson and Ruth release Lance from the secret room, Nora tells them that she shot Frederick. When they arrive in the cellar, Frederick explains that he loaded her gun with blanks, that his wife and David plotted to kill him, and that they both met their end in the vat of acid. He implies that he will claim self-defense and, although responsible for their deaths, will not be convicted. Watson remains convinced the house is haunted, with David and Annabelle now added to its ranks of ghosts, and that he will be the next victim.

Five strangers struggle when a madman imprisons them in an underground dungeon in this nail-biting horror.

A group of idealistic, but frustrated, liberals succumb to the temptation of murdering rightwing pundits for their political beliefs.