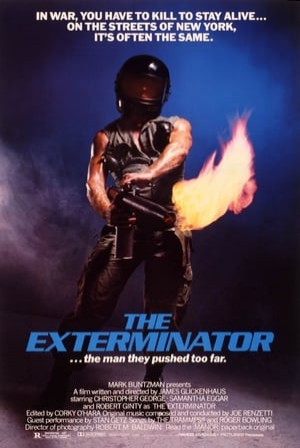 When John Eastland's best friend, Michael Jefferson, is mugged and left permanently crippled, he decides to do something about it. Jefferson had saved Eastland's life in Vietnam and now it's time for Eastland to get revenge for his friend. Using his old Army gear he sets out on a crusade to clean up the streets of New York using the name "The Exterminator."

Christopher George, Robert Ginty and Samantha Eggar star in The Exterminator, James Glickenhaus' explosive story of Vietnam vet John Eastland (Ginty), a man who launches a bloody vendetta against the New York underworld when his best friend is brutally beaten by a vicious street gang. Eastland becomes a vigilante hero to the public, but to police The Exterminator is a psychopath capable of dangerously undermining an entire government administration. Synapse Films is proud to present The Exterminator in its more violent and gory director's cut, lovingly restored in high-definition from original vault materials.

Seen it at the drive-in

Now days it seems dated and goofy to watch it. However at 16 years old at the drive-in when it came out it was awesome. We stayed at the drive- in and watched it twice that night. At school it was talked about. Those who had not seen it were at the theatre the next weekend to see it. Ah the good old days lol 5 screen drive-ins

In an explosion of gunfire and death, something is born in the trenches of Vietnam. Something is born and something else has died. John Eastland has witnessed the horrors of Vietnam first hand and like all veterans, it has changed him. Now living in New York, trying to make an honest living, he is subjected to the same degree of violence. When his best friend, Michael, is left paralyzed after a mugging, John commits his life to cleaning up the streets using the code name, "The Exterminator." What makes a superhero? What is the difference between a hero and a vigilante. Superhero's like Batman have proved it has nothing to do with super powers. Is it simply a matter of a costume? For my money a super hero is anyone risking his life for the good of the city. If a man fights crime strictly for the sake of revenge he is a vigilante but when the quality of life comes into question, we may now consider him a superhero. Despite your personal definition, The Exterminator falls in that perfect grey area where we get the violence, the anger and the quirkiness without the cheesy one-liners or terrible tights.

This is not to say The Exterminator escapes the necessary cheese of a low budget 80's action film. It also has quite a few roaming subplots and bad moustaches. The beauty of the film, though, is despite the cheese, it is played straight the whole way through. If you are willing to be in the mood and except the dated dialogue, The Exterminator actually holds up as a well made film.

Robert Ginty as the Exterminator is such a fantastically strange choice. His baby face and cold eyes are so misleading it almost feels more realistic than the expected, big jawed, hard ass we see in most action films. James Glickenhaus, the director of this masterpiece, seems to be dedicated to creating something genuine and it shows in every scene.

The Exterminator is dirty and that's why you love it. It's rotten to the core just like the city it was filmed in and we wouldn't have anything less. Despite the follow through of the amazing cover art, The Exterminator will always be one of my favorite vigilante films of all time.

"The Exterminator" is an Action-movie, directed by James Glickenhaus, 1980.

Basic plot: John Eastland (Robert Ginty) and Michael Jefferson (Steve James) are two friends who are coming home to New York from the gruesome Vietnam war. Sadly, a few years later, the dark colored Michael gets brutally attacked by a ruthless gang of thugs, and gets paralyzed for the rest of his life. When Eastland gets to hear about this, he sets out to kill many of the thugs, and later on every criminals he meets. On the other side, detective Dalton (Christopher George) is assigned to the case, and will do anything to stop "the exterminator".

This film is very brutal, even for a action-flick that deals with vengeance. Whenever scenes of violence occur on screen, they mostly end with a grim result. Some of the notable scenes that must be mentioned here include the realistic beheading scene during the opening Vietnam war, and the scene in which Eastland sends a man into a meat grinder.

I really love how Eastland quotes his catchphrase "if you're lying, I'll be back", while threatening a tied up thug with a flamethrower. For some reasons, I also find Mr. George's appearance as the detective to be great.

Not only did this film suffer various censorship while being released around the world, this film was banned from being shown in Norwegian cinemas. It was later released on VHS by the now defunct NOVIO A/S, only to become the very first video movie to get banned in 1984 in relation to the heated topic being "video violence". Since early 2000s, this film is now completely legal in it's uncut version, hence the fact I have a Norwegian DVD copy containing this version.

Do you like action-movies that deal with vengeance, this film is truly a must-see. Actually, I don't hesitate to call this film one of the greatest "vengeance movies" I've seen in several decades, and therefore I give this film an overall rating of 10/10. A similar movie to be highly recommended is the 1974-movie "Death Wish" with Charles Bronson.

I saw the sequel to this movie in the cinema and enjoyed it very much for it was like a Charles Bronson as "The Vigilante" film but with another main actor. I hired "The Exterminator" in video some time later and I enjoyed it even more!. It´s an explosive film, just what one expects to see when sits in front of a screen to watch a movie called "The Exterminator". It´s not a love story or a children cartoon obviously. This movie gives you what you expect to see. A desperate man who wishes to avenge his best friend who has been almost beaten to death by a punch of lousy punks. Once he has taken care of them, then he finds that making justice with his own hands and his own way is quite rewarding... You will enjoy this movie if you enjoyed "Death Wish" or "Dirty Harry". Punks, take care, The Exterminator is coming!!...

A very violent and exciting movie with good actors, very good plot and very realistic gore-sequences. Robert Ginty is a ex-soldier from Vietnam who decides to exterminate the mafia and some other trash from the street. He uses methods that will shock most people and he really gets the job done. This is a violent movie with an atmosphere who really thrilled me. I can recommend it to people who are not easily offended by violence.