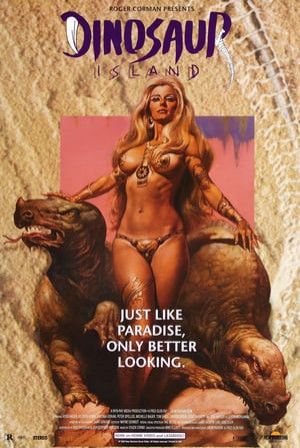 Welcome to lush Dinosaur Island, where a tribe of gorgeous cavedwelling warrior women satisfy the exotic fantasies of five downed military airmen. Fearsome battles with the island's ferocious maneating dinosaurs are the only disruption of their seductive pleasures on this island paradise. Narrowly surviving with their lives, the rugged men fall under the seductive spell of their lovely captors and soon find their every dream fulfilled.

An army captain is flying three misfit deserters home for a court martial when the plane has engine trouble and they crash-land in the ocean near an uncharted island. There they find a primitive society of cave women who routinely sacrifice virgins to appease The Great One, the top-dog dinosaur on the island. Mistaken for gods as part of a prophecy, the men must destroy The Great One or face death, but meanwhile they fall in love despite the advice of their Queen, who tries to dissuade them from being corrupted by the outsiders' ways.