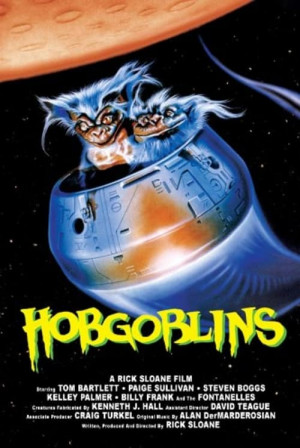 A group of hobgoblins, who allow you to live out your fantasies but kill you in the process, escape from a studio vault, and a security guard and his friends must stop them before dawn.

The film opens with a security guard named Dennis investigating a deserted film vault at an old movie studio. While inside, his fantasy of being a rock star comes to life, but he dies while performing on stage. His boss, Mr. McCreedy (Jeffrey Culver), closes the door upon discovering the body.

A young man named Kevin (Tom Bartlett) takes the now-vacant job so that he can impress his girlfriend, Amy (Paige Sullivan). Upon arriving home after his first shift, he finds that his two friends, the sex-crazed Daphne (Kelley Palmer) and the dorky Kyle (Steven Boggs), are waiting for him along with Amy. Daphne's Army boyfriend Nick (Billy Frank) also arrives. Nick and Kevin spar with a rake and a garden hoe in a long, protracted, repetitive scene. After Kevin loses horribly, Amy berates him for his weaknesses while Daphne and Nick have sex in Nick's van in the background of the scene.

While in pursuit of a burglar the next evening, Kevin stumbles across the vault, which is revealed to contain a small group of hairy, demonic little aliens — the hobgoblins, who subsequently escape, leaving Kevin stunned. His boss, the elderly Mr. McCreedy, explains that the hobgoblins crash-landed on the studio lot decades earlier, and he has been closely guarding them ever since. The hobgoblins have the hypnotic power to make a person's wildest fantasies come true; however, they also kill their victims in the process when people's fantasies turn against them.

The hobgoblins go straight to Kevin's house, where his friends are partying, as they are attracted by the bright lights. The hobgoblins quickly make their fantasies come true, but with dire consequences. The quiet, prudish Amy's fantasy leads her to the sleazy nightclub, Club Scum, where it turns out that Amy's deepest fantasy is to lose her sexual inhibitions and be a stripper. Kevin and the others follow her there.

The nightclub erupts into chaos while Kevin and his friends try to kill the rampaging hobgoblins. Nick is given a fantasy in which he leads a commando raid. In the melee, Nick is set on fire by a hand grenade thrown by his commanding officer and is apparently killed (again, his fantasy goes to extremes and turns against him), though he returns later in the movie, bandaged and on crutches, but otherwise unharmed. Kevin kills the hobgoblin in control of Amy before she can have sex with the scruffy bouncer, Roadrash (Duane Whitaker). Although Amy is restored to her original personality, her experience leaves her less sexually repressed than she was before.

Thinking that all the hobgoblins are dead, Kevin, Amy, Kyle and Daphne return to the studio lot to report back to Mr. McCreedy. Kevin is confronted by the burglar from earlier that night, and beats him in a fight, finally proving his bravery to Amy. Kevin's victory, however, is short-lived, as the burglar is revealed as yet another phantom created by the hobgoblins. As he pulls a gun from an ankle holster and aims it at Kevin, Mr. McCreedy shoots the controlling hobgoblin, thus saving Kevin's life. The remaining hobgoblins run back into the vault, which McCreedy has filled with explosives. The hobgoblins are then blown to pieces. Amy promises to have sex with Kevin, Nick returns to have sex with Daphne, and Kyle, the odd man out, asks to use McCreedy's phone, presumably for more phone sex.