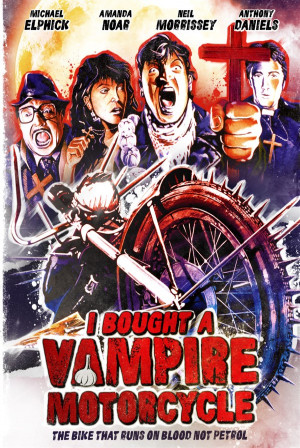 I Bought a Vampire Motorcycle

When a motorbike gang kills an occultist, the evil spirit he was summoning inhabits a damaged bike. The bike is then bought and restored, but reveals its true nature when it tries to exact vengance on the gang, and anyone else who gets in its way.

A motorbike gang kills an occultist with a crossbow during a satanic ritual. An evil spirit inhabits a damaged bike. Noddy is then seen purchasing that very motorcycle for the price of £1100 from a dealer, but he tells Kim he only paid £600. He proceeds to take it home and fix, with his friend, Buzzer, and girlfriend, Kim, the damage caused by the crossbow by replacing the fuel tank. Buzzer steals the petrol cap for "funsies" but then the bike kills him by decapitation.

It is revealed to the audience that the vehicle has become a bloodthirsty monster. Noddy goes to the scene of the crime where he meets an inspector who smells like garlic. Later, Noddy has a bad dream that the inspector gives him Buzzer's head in a bag and it talks at him but then he wakes up. Then he goes back to sleep and dreams Buzzer is a poo that jumps in his mouth and starts asking how he is. Noddy wakes up again and is chewing his duvet. Noddy and Kim go to the pub and order a large vodka tonic and a pint of cider. Then ten of the bikers from the beginning come in and shoot the bar with the crossbow. One then offers to show Kim his "chopper" while she is playing pool. She declines, claiming not to have brought her magnifying glass. He then proceeds to unsheathe an axe and attack the pool table and moving onto plates, starting a bar wide brawl of 10 bikers against our protagonists. Kim manages to slip out the front and drive the bike round the back of the pub where Noddy jumps on it from the first floor and then gets shot with a crossbow bolt.

They then have Chinese. When Kim orders garlic prawns, the bike goes mad and drives off with her. It takes her under a bridge, throws her off and makes advances on her, until it notices the crucifix around her neck. It drives off back to the pub where Chopper attempts to steal it but the bike stabs him through the leg with a large metal spike, then launches him at some graffiti artists. It then proceeds to exact its revenge on the rest of the gang, decapitating the majority and leaving only Roach with a bolt inserted into his posterior.

Noddy then finds out Kim has been taken to hospital where she describes the bike's advances with a hollow look in her eyes. It is then seen that the inspector is looking at some heads. Noddy then goes to a priest, who also has a motorcycle. There is then several crucifix wipes as they travel to the garage where the bike is kept. The priest is sarcastic and does not believe Noddy. Not wanting to be taken into the sunlight, the bike uses its brake lever to sever the priest's fingers. Determining the bike is a vampire, the priest decides to do an exorcism. Believing the bike will come back for Kim, the priest gives her a crucifix and garlic. The priest throws a shuriken at a fly whilst planning the exorcism and exclaims "Right. Let's go kick some bottom!".

The vampire bike stops Noddy and the priest on the way home by disabling the bike they are riding, so they decide to call a taxi but instead wait for a bus. It is a race against the sun to get to the vampire bike before nightfall when it will be free to roam once more. During the exorcism, the priest is hit in the head with a wrench and Noddy is blown around the room by a mysterious wind, knocking him into cupboards. The priest is then crucified with a crown of barbed wire. Believing to have successfully vanquished the demon, the priest sprinkles holy water, but that only makes the bike angry, growing spikes and glowing red.

Noddy runs off and steals a police motorcycle, dragging the policeman behind him, who is almost run over by the vampire bike. The bike is chased by a police car, while the priest attempts to explain it to the authorities and Kim is washed, having her garlic removed. The bike evades the police by driving vertically down a wall and goes to the hospital to finish off Kim but not before cleaving the tea lady in two. Kim uses her crucifix to scare it away, so it goes after Roach, passing the priest and inspector in the corridor of the hospital. Roach crashes while fleeing and lands in a coffin. He is presumed dead.

The bike then goes for Noddy but gets its front wheel stuck in a bridge, giving Noddy the chance to throw it in a river and spit. Thinking he is safe, Noddy has a victory smoke, but the audience sees a red-light under the water. Noddy then sees it and screams and runs around like a lunatic. He hides in a gym, but the bike doesn't take long to find him and start attacking the patrons with its spikes. Noddy then bashes the bike, which feigns death, making everyone feel safe, until it starts throwing people's limbs in the air. The inspector scares it with his smell. The bike manages to trap Noddy against a wall, but is stopped when Noddy turns on a sun bed. Everyone uses their crucifix and/or garlic breath to force it into the light and it melts. Kim asks how much Noddy really spent on the bike and the priest says they are usually reliable. Back in Noddy's workshop, he accidentally cuts his hand and the blood drips onto the bike's old fuel tank which springs open, leaving the audience begging for a sequel.