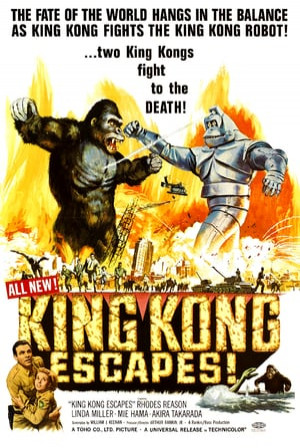 An adaptation of the Rankin/Bass cartoon, "The King Kong Show". King Kong is brought in by the evil Dr. Who to dig for Element X in a mine when the robot Mechani-Kong is unable to do the task. This leads to the machine and the real Kong engaging in a tremendous battle atop Tokyo Tower.

An evil genius named Dr. Who creates Mechani-Kong, a robot version of King Kong, to dig for the highly radioactive Element X, found only at the North Pole. Mechani-Kong enters an ice cave and begins to dig into a glacier, but the radiation destroys its brain circuits and the robot shuts down. Who then sets his sights on getting the real Kong to finish the job. Who is taken to task by a female overseer, Madame Piranha, whose country's government is financing the doctor's schemes, and frequently berates him for his failure to get results.

Meanwhile, a submarine commanded by Carl Nelson arrives at Mondo Island, where the legendary King Kong lives. Here, the giant ape gets into an intense fight with a giant dinosaur Gorosaurus and a sea serpent. He falls in love with Lt. Susan Watson (played by Linda Jo Miller) following in the footsteps of Ann Darrow from the 1933 film.

Dr. Who subsequently goes to Mondo Island, abducts Kong and brings him back to his base at the North Pole. Kong is hypnotized by a flashing light device and fitted with a radio earpiece. Who commands Kong to retrieve Element X from the cave. Problems with the earpiece ensue and Who has to kidnap Susan Watson, the only person who can control Kong.

After Watson and her fellow officers are captured by Who, Madame Piranha unsuccessfully tries to seduce Nelson to bring him over to her side. Eventually Kong escapes and swims all the way to Japan where the climactic battle with Mechani-Kong transpires. The two giants face off at the Tokyo Tower in the finale. Kong prevails and destroys Mechani-Kong and kills Who. Then Kong triumphantly swims back to his island home.