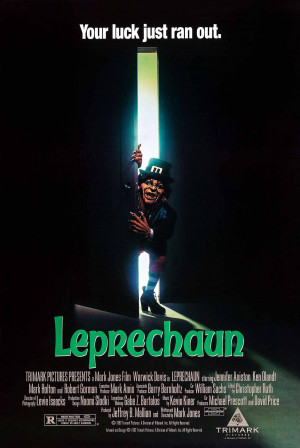 Dan O'Grady steals 100 gold coins from a leprechaun while on vacation in Ireland. The leprechaun follows him home, but Dan locks the leprechaun in a crate, held at bay by a four-leaf clover. Ten years later, the leprechaun is accidentally released and goes on a murderous rampage to reclaim the stolen gold.

In 1983, Dan O'Grady returns to his home in North Dakota from a trip to his native Ireland, where he stole the pot of gold from a leprechaun. After burying the gold, O'Grady discovers that the evil leprechaun has followed him home and murdered his wife. O'Grady uses a four-leaf clover to suppress the leprechaun's powers and trap him inside a crate. Before he can burn him, he suffers a stroke.

Ten years later, J. D. Redding and his teenage daughter Tory rent the O'Grady farmhouse for the summer. Contract workers Nathan Murphy, his 10-year-old brother Alex, and their dimwitted friend Ozzie Jones help re-paint the farmhouse. While looking around the basement, Ozzie hears the leprechaun's cry for help and mistakes him for a little child. He brushes the old four-leaf clover off the crate, freeing the leprechaun. After failing to convince the others that he met a leprechaun, Ozzie spots a rainbow and chases it, believing that he will find a pot of gold at the end. Alex accompanies him for fear that Ozzie might hurt himself. A bag of one hundred gold coins magically appears before Ozzie. After Ozzie tests the gold and accidentally swallows a coin, they stash it in an old well and plot to keep it for themselves, hoping to fix Ozzie's brain.

After finding a shotgun in the farmhouse, they shoot the leprechaun several times. When this has no effect, they attempt to flee the farm, but their truck's engine has been sabotaged by the leprechaun. After ramming the truck with a go-kart, the leprechaun terrorizes the group until Ozzie reveals that he and Alex found the pot of gold. Tory recovers the bag from the well and gives it to the leprechaun. Believing the worst to be over, they leave for the hospital. While counting his gold, the leprechaun discovers that he is missing the last coin that Ozzie swallowed. Thinking that they have tricked him, he menaces them until Ozzie tells them about O'Grady, who was taken to a nursing home after his stroke. Tory visits the home to learn how to kill the leprechaun.