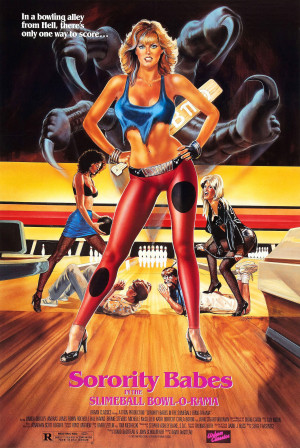 Sorority Babes in the Slimeball Bowl-O-Rama

When three college guys get caught spying on a sorority ritual, they're forced to accompany the pledges on their next assignment: stealing a trophy from a bowling alley. But the token they pinch has a devilish imp who makes their lives a living hell.

Three nerdy frat boys, Calvin, Jimmie, and Keith, follow and spy on the Tri-Delta sorority group, which is holding an initiation ceremony. Sorority members Babs, Rhonda, and Frankie prepare for the ritual while newcomers Taffy and Lisa wait. Observed by the frat boys outside their house, the two initiates get spanked from a paddle and are sprayed with whip cream during the initiation. While the girls clean themselves, the boys enter the house; the girls catch them there. The boys are then sent, with the pledges, on a mission to steal a trophy from a nearby bowling alley. Unbeknownst to them, Babs's father runs the mall where the bowling alley is located and watches the group through security cameras.

The group enters the bowling alley and encounters Spider, a biker burgling the alley with a crowbar. With her help, they break into the trophy room and, upon accidentally dropping the bowling trophy, unleash an imp named Uncle Impie who offers each of them one wish for freeing him. Jimmie is granted his wish of gold stacks, Taffy her wish of being the Prom Queen, and Keith his wish of having sex with Lisa. Then Uncle Impie attacks the sorority trio from the camera; Frankie is turned into the Bride of Frankenstein; and Rhonda is turned into a demon minion; Babs flees. After Babs is rendered unconscious from touching the mall's doors (which Uncle Impie has electrified to keep the group from leaving), the group finds out that the wishes requested were not really granted, with Jimmie's gold made out of wood and Taffy's dress disappearing.

The minions kill Jimmie and use his head as a bowling ball, and Lisa tries furiously to have sex with Keith. Spider and Calvin hide from Rhonda in a closet, where they find a pistol; they shoot Rhonda, then flee. After escaping Lisa, Rhonda kills Keith by shoving his face into a stove, and the minions pull Taffy apart. Babs awakes and fights Rhonda, shoving her into the alley where she is seemingly killed by Spider, with a bowling ball. With Rhonda dead, Babs is possessed and turned into a demon minion.

Calvin and Spider find the janitor, who reveals that the Imp was summoned to help a lousy bowler become a champion, and the Imp was trapped for 30 years due to the creature killing people (the bowler was blamed and executed for the deaths). Meanwhile, after Babs kills Lisa with a paddle, she is burned to death with a Molotov cocktail tossed by Calvin. After Spider and Calvin find the janitor dead, they are chased by Frankie with an axe. Spider gains the upper hand and decapitates her, and the severed head knocks the doors open. While Calvin starts up a car and is attacked by Rhonda from the backseat, Spider successfully traps Uncle Impie in a box. Calvin's struggles to control the car, and ends up crashing upside down; Calvin apparently survives this and Rhonda is killed from the crash. In the morning, Spider drives Calvin to her house in her motorcycle while Uncle Impie is seen trapped in the box at the curb, asking someone to let him out.