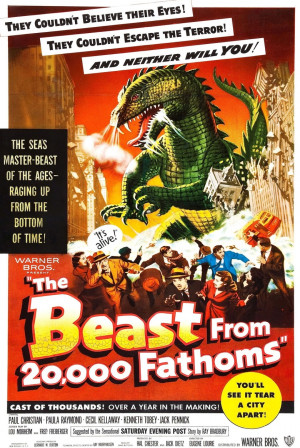 An atomic bomb test in the Arctic Circle unfreezes a hibernating fictional dinosaur, a Rhedosaurus, that begins to wreak havoc in New York City.

Far north of the Arctic Circle, a nuclear bomb test, dubbed "Operation Experiment", is conducted. Prophetically, right after the blast, physicist Thomas Nesbitt muses "What the cumulative effects of all these atomic explosions and tests will be, only time will tell". The explosion awakens a 200-foot (61 m) long carnivorous dinosaur known as a Rhedosaurus,[9] thawing it out of the ice where it had been held in suspended animation for millions of years. Nesbitt is the only surviving witness to the beast's awakening and later is dismissed out-of-hand as being delirious at the time of his sighting. Despite the skepticism, he persists, knowing what he saw.

The dinosaur begins making its way down the east coast of North America, sinking a fishing ketch off the Grand Banks, destroying another near Marquette, Canada, wrecking a lighthouse in Maine and destroying buildings in Massachusetts. Nesbitt eventually gains allies in paleontologist Thurgood Elson and his young assistant Lee Hunter after one of the surviving fishermen identifies from a collection of drawings the very same dinosaur that Nesbitt saw. Plotting the sightings of the beast's appearances on a map for skeptical military officers, Elson proposes the dinosaur is returning to the Hudson River area, where fossils of Rhedosaurus were first found. In a diving bell search of the undersea Hudson River Canyon, Professor Elson is killed after his bell is swallowed by the beast, which eventually comes ashore in Manhattan. A later newspaper report of its rampage lists "180 known dead, 1500 injured, damage estimates $300 million".

Meanwhile, military troops led by Colonel Jack Evans attempt to stop the Rhedosaurus with an electrified barricade, then blast a hole with a bazooka in the beast's throat, which drives it back into the sea. Unfortunately, it bleeds all over the streets of New York, unleashing a horrible, virulent prehistoric contagion, which begins to infect the populace, causing even more fatalities. The infection precludes blowing up the Rhedosaurus or even setting it ablaze, lest the contagion spread further. It is decided to shoot a radioactive isotope into the beast's neck wound with hopes of burning it from the inside, killing it without releasing the contagion.

When the Rhedosaurus comes ashore and reaches Coney Island amusement park, military sharpshooter Corporal Stone takes a rifle grenade loaded with a potent radioactive isotope and climbs on board a roller coaster. Riding the coaster to the top of the tracks, so he can get to eye-level with the beast, he fires the isotope into its open neck wound. It thrashes about in reaction, causing the roller coaster to spark when falling to the ground, setting the amusement park ablaze. With the fire spreading rapidly, the park becomes engulfed in flames. The Rhedosaurus collapses and eventually dies from isotope poisoning and heat stroke.

Sir James Bond is called back out of retirement to stop SMERSH. In order to trick SMERSH, James thinks up the ultimate plan - that e...More

L.A. bounty hunter, Zachary Kane, is on the hunt for a masked serial killer on the loose.

In the year 10,191, the world is at war for control of the desert planet Dune—the only place where the time-travel substance 'Spice' can be f...More

Sister Kelly Wrath is a nun with a temper problem. After being gunned down in an alley, she is selected by God to join The Order of th...More

Aging outlaw, Pike Bishop prepares to retire after one final robbery. Joined by his gang, Dutch Engstrom and brothers Lyle and Tect...More

Jesus Christ is reborn, to a father who is a strict Southern Baptist. As a teenager, Jesus rebels against his rigid upbringing. He joins a bike...More