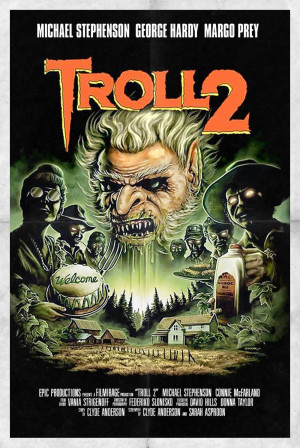 When young Joshua learns that he will be going on vacation with his family to a small town called Nilbog, he protests adamantly. He is warned by the spirit of his deceased grandfather that goblins populate the town. His parents, Michael and Diana, dismiss his apprehensions, but soon learn to appreciate their son's warnings. Guided by his grandfather's ghost, will Joshua and his family stand a chance in fighting off these evil beings?

Michael Waits has always dreamed of being a farmer, and arranges a home exchange vacation in which he and his family will move into a house in the rural farming community of Nilbog ("goblin" spelled backwards) for a month. The night before the family is scheduled to leave, Michael's son Joshua is contacted by the ghost of his dead grandfather, Seth, warning him that vegetarian goblins want to mutate him and his family into plants so that they can eat them. Seth tells Joshua that goblins can mutate people into plants by feeding them poisoned food or drink.

Meanwhile, Joshua's sister, Holly, receives a visit from her boyfriend Elliot Cooper. Holly accuses Elliot of being a homosexual since he seems to prefer spending time with his friends. Elliot promises to show his devotion by accompanying the family on vacation.

The next morning, Elliot fails to arrive and the family leaves without him; they encounter him en route to Nilbog, riding in an RV with his friends Arnold, Drew, and Brent. Outside of Nilbog, Seth appears as a hitchhiker, who warns Joshua that Nilbog is the kingdom of the goblins, and that if his family eats anything while they are there, they will be mutated into plants. The family disbelieves Joshua's warnings and continue on to Nilbog, where they meet their strange and aloof exchange family, the Presents. There, Joshua sets about destroying all of the food the family finds or acquires, such as by urinating over a feast prepared for them, with the help of Seth's ghost.

Arnold goes for a walk outside of Nilbog and encounters a girl being chased by goblins. When Arnold approaches them and insults them, they respond by throwing a spear into his chest. They flee to a chapel in the woods, where they encounter the goblins' queen, Druid Witch Creedence Leonore Gielgud, who uses the "Stonehenge Magic Stone" to give the goblins power. Creedence tricks them into drinking a magic potion that dissolves the girl into vegetable matter, a horrifying scene witnessed by Arnold that prompts him to scream helplessly only to be mutated into a tree.

The following morning, Michael and Joshua venture into town to buy some food, as there is none in their holiday home. When in town, they find the general store closed, and Michael falls asleep on a bench. Joshua enters the local Church and eavesdrops on a goblin church sermon, which bewails the "evils" of eating meat. The parishioners capture him after seeing his skateboard roll into the church and attempt to force feed him poisonous ice cream; Michael walks in on the scene and becomes suspicious, taking Joshua home.

Later, Drew goes to the town because there are no food or drinks in the RV. The sheriff Gene Freak takes him in his car and gives him a green hamburger. When he arrives in the town, Drew goes to the store and the owner offers him poisonous Nilbog milk. Feeling dizzy, he goes to a chapel and finds Arnold, who has mutated into a tree. Drew drags him out, but Creedence appears. She knocks him out and chainsaws Arnold into pieces. Drew is then killed off-screen.

At the house, the family discover that the townspeople have prepared them a surprise party to apologize for the events at the church. Joshua attempts to make contact with Seth, only for Creedence to appear in goblin form through the mirror, and attacks Joshua. Seth's ghost appears and chops her hand off with an axe. Creedence returns to her chapel, where she mutates herself into a beautiful woman in revealing clothes; she then travels to Elliot's RV, where she seduces Brent and drowns him in popcorn.

During the party, Seth and Joshua try to cause a distraction using a Molotov cocktail, however the Priest captures them, takes the cocktail, and recites a spell that banishes Seth's soul to Hell. However, before he vanishes, Seth summons a bolt of lightning from the sky, which ignites the cocktail and kills the Priest in a fiery explosion. When Michael extinguishes his burning corpse, his true Goblin form is revealed, and the villagers turn on the Waits, revealing themselves all as Goblins. The Waits and Elliot then retreat to the house, where the villagers surround them and hold them hostage.

Joshua, Elliot, Holly, Michael and Diana hold a séance to communicate with Seth, who returns from the dead and tells them that he can retain a physical form for exactly ten minutes before he has to return to the afterlife. Seth gives Joshua a paper bag containing a "secret weapon" to use against the goblins. The goblins break into the house and transport Joshua to Creedence's chapel, where Joshua opens the bag, revealing a "double-decker Bologna sandwich". He eats the sandwich, making his body poisonous to the goblins; he then touches the Stonehenge Stone, along with his family and Elliot, which destroys Creedence and all of the Goblins present.

The family returns home, where Joshua's mother is seen eating food from the refrigerator. The food, unknown to the family, has been poisoned by the family of goblins which is very likely to be the Presents family, who took over their home during their exchange in the country. Joshua walks in on a group of goblins eating his mother's green, bloated torso off of the kitchen counter and offering him a bite. Joshua screams in horror.